LCL at Richmond and the Third District

West bound LCL arrived in the Bay Area from the east and southern California in through cars for Oakland or San Francisco with 3-5 cars scheduled to Oakland and 18-21 cars scheduled to San Francisco daily.  10 of those SF cars came from Corwith in Chicago.  Cars arriving Barstow on schedule 31 had a connection with schedule 43 to Richmond.  Other cars may have been placed on the NCX or EFX depending on when they arrived Barstow.  I’ll have to dig deeper into the schedules.  Richmond was the terminus for the Stockton West Way Peddler car that served the Third District via Freight Schedule 83 or an extra west.  One car a day arrived from Fresno on schedule 43.  Richmond originated 2 cars, one each for Oakland and San Francisco.  They may have used the inbound Fresno car for the Oakland load as it had freight for Oakland as well, but it was not carded as a through car.  The Fresno car for SF went directly to the car float and on to SF without trans loading at Richmond.  The Richmond-SF car also carried freight for the NWP, WP north of Oroville, points in Oregon and Washington, and points via Chicago.  A drum of chemicals from Dow in Pittsburg destined to Delaware would have begun its journey with a round trip to San Francisco in a box car by barge.

Eastbound, 5 cars moved through Richmond from Oakland or San Francisco and were entrained on the SCX without stopping at the Freight House each day except Sunday, with an additional car from San Francisco carded directly to the Erie in Chicago three days a week.  Oak-3 picked up freight for Bakersfield, Oak-4, Fresno, SF-1-Kansas City; SF-2-Albuquerque; SF-3-San Diego; SF-4-Los Angeles; SF-8-Stockton; SF-9-Merced; SF-10-Modesto each day.  Inbound Oakland cars 1, 2 and 5 were consolidated with the SF cars. SF-12-Fresno Perishable, operated Mon-Wed-Thurs; SF-13-Merced perishable, operated on Monday.  These cars were also scheduled out on the SCX which left Richmond nightly at 9 PM.

SF-5-"San Pablo & East", peddled via barge at Alice Street, offloaded SF traffic for Richmond to Oakland and continued east on 84 as a peddler car.  SF-7-Pittsburg, took freight for the Sacramento Northern to the interchange at Port Chicago.  It also departed on 84.

In any case, loading at the Freight House had to cease early enough for the cars to be switched into their outbound trains, probably and hour or two prior to the scheduled departure.

Quite a few years ago, before Russell Crump passed, I downloaded a copy of Santa Fe System Circular 231, Red Ball Freight Schedules 1942-44 from his ATSFRY website.  I formatted the information pertinent to the Valley division into a time table like spread sheet.  Little did I know then, that this information derived from Keith Jordan’s Circular 235 LCL Schedules http://www.atsfrr.org/resources/KJordan/LCL1946.pdf would dovetail with something I’ve had for ten years or so. 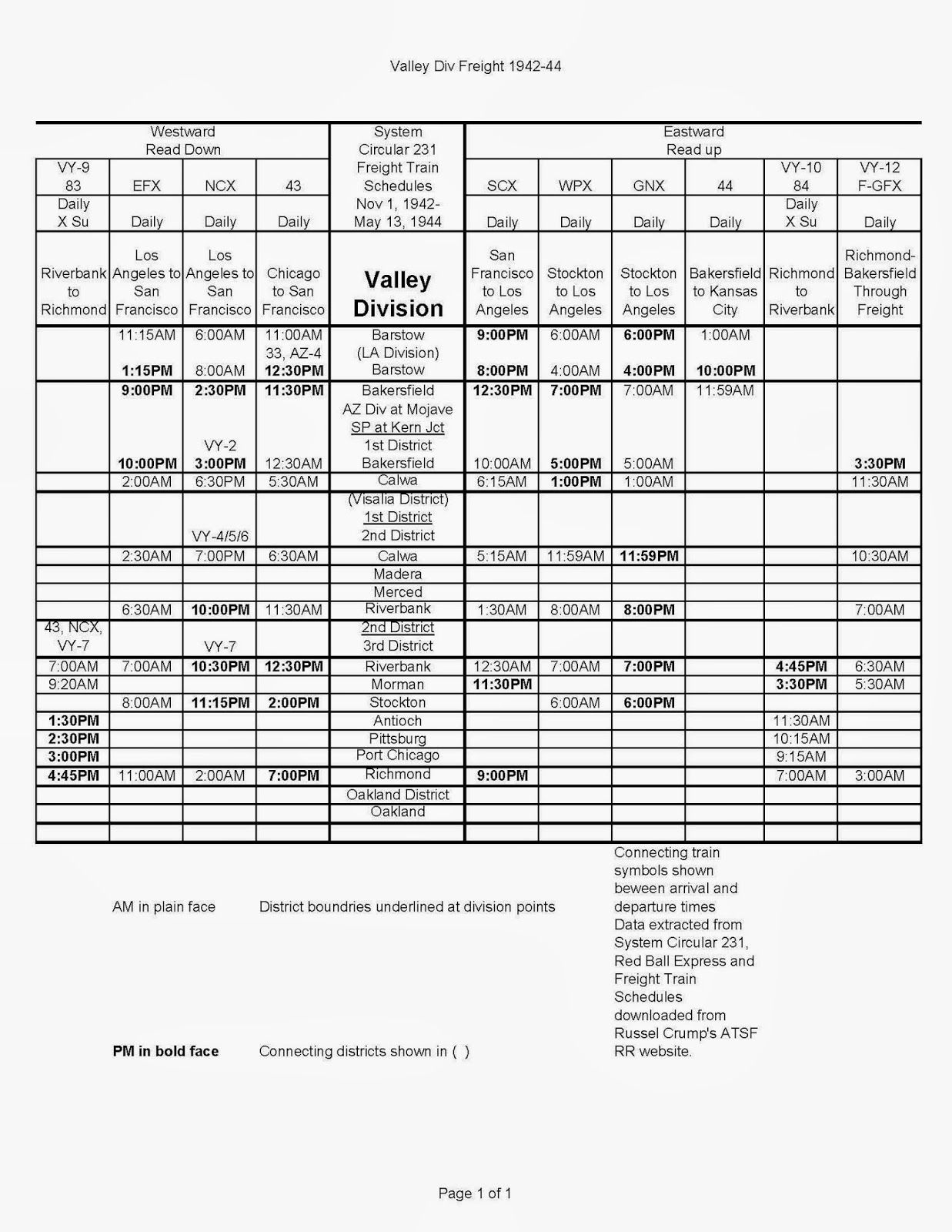 This is only a portion of the schedule for the Valley, but has the through connections.  Keep in mind that this is a service schedule only and conveys no authority to occupy a main track.  That would have been done by operating these schedules as either an extra train via train orders, or using one of the second class freight schedules, all westward trains in my 1944 modeling year.  Thanks to Russell and Keith, with some good guidance from Steve Sandifer, I now can accurately replicate the Freight House and LCL operations at Richmond.  As an added bonus, this gives me a steady source of barge traffic for my car float operation.