The 86th Infantry Division was my dad’s unit, at least the one he went into combat with in 1945.  He didn’t start out with the Blackhawks, but returned to the infantry when the Army Air Forces drastically reduced the number of pilot candidates.  In the summer of 1944, dad and the division completed their field training in the Louisiana maneuver area at Camp Livingston just outside Alexandria.  Next on the agenda was amphibious training in California.  That was scheduled for Sep 44 -Feb 45, which would have made them available for Operation Iceberg, the invasion of Okinawa in April of 45.  Adolf and von Rundstedt intervened in Dec of 44 though and caused a shake up in deployment plans as additional forces were rushed to the European Theater.  The Blackhawks were one such unit, diverted from their amphibious training in Jan 45 before it was complete.

Looking for the move to Boston in the division records now at the National Archives at College Park, I didn’t find anything on that move.  But I did find three administrative memos that described preparations for the move west.  These memos were the instructions to the division components about which units and how many members and what equipment would be on which train on what date.  This was at least the second set of memos about the move as memo #30 of 2 Sep 44 rescinded and replaced memo # 25 of 21 Aug 44.   That earlier memo didn’t make it to the file box in the archives, so I can’t tell you what changed, or even if it was the first cut at the plan or the third one.  But we do have a record in memos 29 and 30 of what was carried out as evidenced by memo 1A issued on 9 Sep 44 at Camp Cooke detailing drivers to meet the twenty incoming troop trains.

So what did the Blackhawks move and how?  What did it take to move an Infantry Division in 1944?  What did they NOT take?  The division moved 9146 people (650 Officers, 8496 Enlisted) and their weapons in twenty one passenger and two freight trains.  They used 464 rail cars to make up those trains: 28 Standard Pullmans (26 Officer Capacity), 221 Troop Pullmans (39 EM Capacity), 43 Baggage, 42 Kitchen, 62 Box and 68 Flat cars.  On the first freight, 3 flats took 9 armored cars of the Reconnaissance Troop, 15 took 57 M10 trailers of the Division Artillery, 14 took all of the 37mm guns, 2 took 3 small arms repair trucks of the Ordnance Company, and one carried the Signal Company’s SCR-339 radio with trailer and the HQ company medium sedan.  The second freight carried 12 flats with 12 155mm howitzers and 12 M5 tractors of the 404th Field Artillery Bn.; 15 with the 36 105mm howitzers of the 331st, 332nd, and 911th Field Artillery Bns.(Link to militaryresearch.org 1944 TO&E 12 guns/Bn); and 6 with 4-ton trucks of the 404th Field Artillery and 311th Engineer Bn.  What they didn’t take was their trucks, half-tracks and jeeps.  Those evidently were assigned to the training centers and remained in place for the next division to roll through.  The Blackhawks would use the vehicles assigned to Camp Cooke for their next phase of training.

The advance party made up of 67 officers and 331 enlisted from elements of the division departed on 3 Sep 44 and arrived prior to 9 Sep.  They say an Army travels on its’ stomach and a portion of memo #29 bears that out, detailing who was to set up and run the two messes in the kitchen cars on the train and that the mess assignments would continue at the destination, Camp Cooke, until released to their respective messes upon the arrival of their respective units at the new station.

I’ve compiled a spreadsheet showing the details of the trains and posted it to Google Drive.  You may download it by clicking here: 86 ID Livingston-Cooke.XLS.  Click here for copies of the de-classifiedadministrative memos.

I hope that you will find these tables both interesting and useful.  It took a lot of rolling stock to move a division, even one without its organic vehicles and just its weapons.  Also note that the division did not yet have its attached tank or tank destroyer battalions, only its recon troop of armored cars. The Freights were scheduled for 128 hours enroute.  The 20 passenger MAIN trains averaged 83.4 hours ranging from a 79.5 to 90.9 hours enroute.

From files at the National Archives in Record Group 336, Records of the Office of the Chief of Transportation is a Government Bill of Lading for a dedicated military equipment train moving the guns and vehicles of the 941st Field Artillery Battalion in September 1943.  GBL# WQ12812080 documents the shipment of 24 4.5 inch guns, 25 4 ton trucks, 45 2½ ton trucks, one wrecker, and 67 trailers from Camp Polk, LA to the Desert Training Center, Freda, CA.  The shipment originated on the KCS and terminated on the Santa Fe.  The routing on the GBL was KCS CRIP ATSF.  Camp Polk is at Leesville, LA served by the  KCS.  Actual route traveled was very likely Camp Polk-KCS-Howe, OK-CRIP-Amarillo-P&SF-Clovis-ATSF-Belen-ATCL-Freda.  On the Santa Fe, the train would have operated Amarilo-State Line on the P&SF Plains Division thence ATSF Plains Div to Clovis then Pecos Division to Belen, ATSF Coast Lines Albuquerque Div to Seligman, Arizona Div to Cadiz then the branch line to Freda. 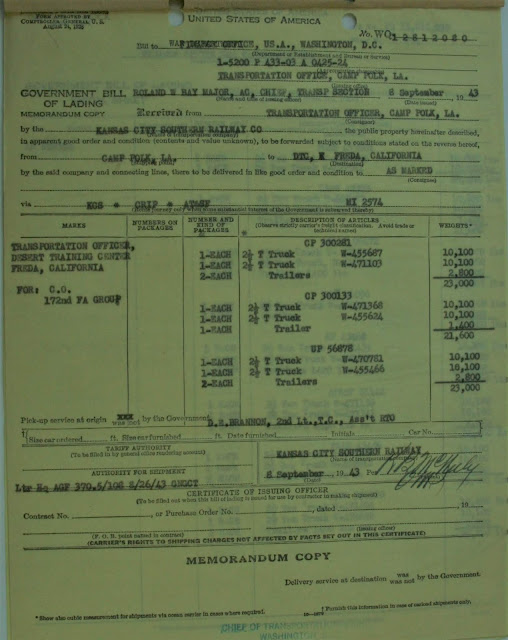 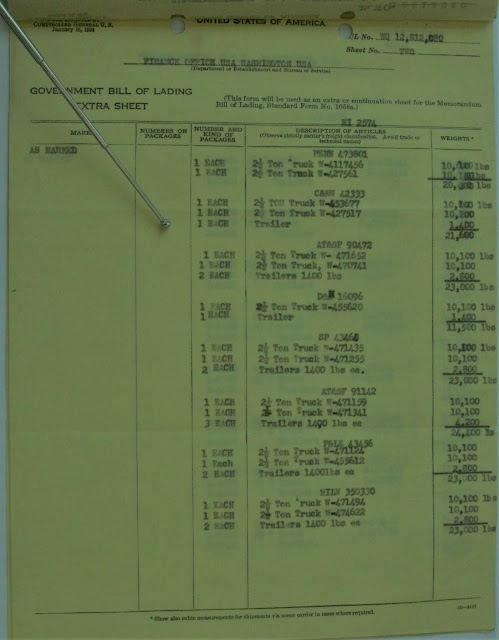 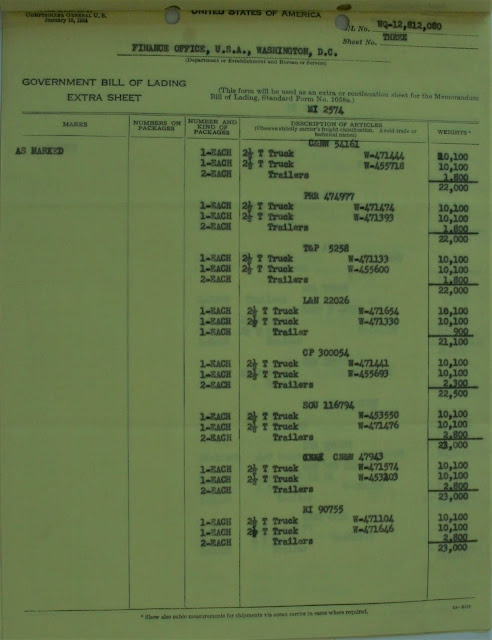 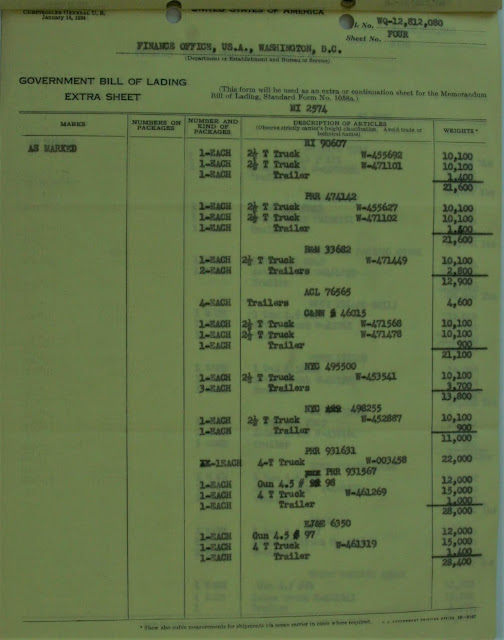 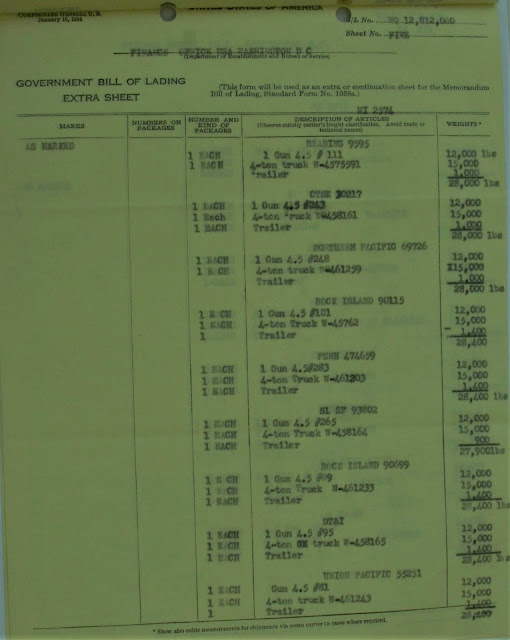 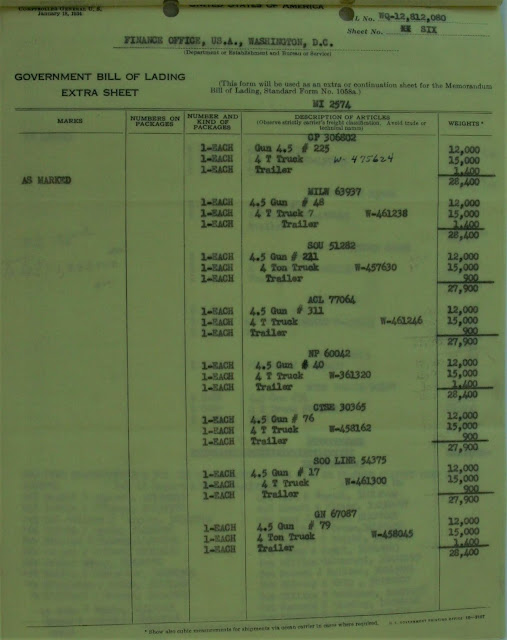 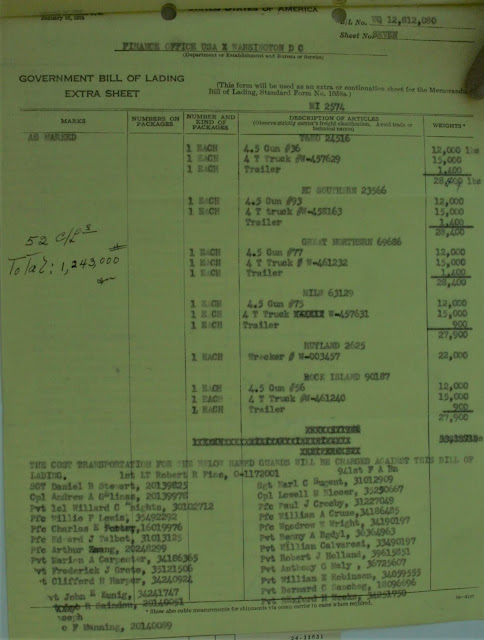 Commanded by 1st Lt Robert Fine, a force of two Sergeants, two Corporals and 21 privates guarded the shipment enroute.  The train was a dogs breakfast of cars consisting of one unknown DT&I car, 2 drop end gondolas, and 48 flat cars of various lengths ranging from a large Santa Fe Ft-T at 60 feet to a diminutive 33 foot D&H car.  Gilbert-Nelson distribution was not evident in the make up, nor was the typical home rode percentage.  PRR provided 6 flats, RI 5 (just under 10% of home road cars while on the Rock), CNW and CP 4 each, MILW 3.  Eight roads provided two cars each: ACL, ATSF, CTSE, GN, NP, SOU, NYC and UP.  Fifteen other roads had single cars in this movement.

For those of you interested in modelling military equipment, the Bill of Lading shows the Army Vehicle registration numbers so you can get the right deuce and a half on each flat car.  I’ve also attached a link to a spread sheet of the cars and loads.  Click here to view/download:

Update as of 2258 EDT 4 August
Thanks to a note from Jim Betz, I've updated the text above to reflect the correct owner (KCS) of the trackage at Leesville, LA.  In the wee hours of the morning, I had conflated the L&A at Alexandria from my research into another move from Camp Livingston.

Answering a query from John Thompson, I discovered I missed a NYC car in the spreadsheet I originally posted, there really were 52 cars in this shipment.  I've uploaded a corrected copy that also has a second page with the vehicle registration numbers.  I made two corrections of apparent typos on the GBL to more closely align the 2.5T truck serials with the pattern present with the others shipped.  Also, one of them seems to be missing a digit. No way to infer a correction for that.

In answer to his question, the 2.5T trucks are probably the "closed cab" variant of the GMC CCKW as the "open cab" version was just coming into production in 1943.  Not sure whose 4T truck would have been used at this point in the war.  Modelling suggestions for the vehicles and flats welcomed.  For the ATSF Ft-N, you can use the original length Sunshine kit, not the stretched 53 ft versions.  I Know of no available source for the 60 foot Ft-T.  Bowser has a PRR F30a.  F&C has a twofer kit of the PRR Fm.