Sources, Correcting Errors, and the Journey of NEOX 238

I’ve not posted in a long time, but I have been doing more research for the back story of the North Bay Lines.  In an attempt to build a more accurate freight car fleet, I’ve been combing through the copies of the materials I gathered at the National Archives San Bruno Branch last fall.  I also recently transcribed the 1936 ATSF Statement of Steam Locomotive Assignments to a searchable spreadsheet.  In both cases, I was fortunate to have digital copies of the originals from the respective archives.  Usually archival materials are considered primary sources: contemporaneous (made at the time), by those who took part in whatever is recorded.  But some times you have secondary sources (derived from primary sources) mixed in with the primary ones.  And then, you have what we as members of the general public and rail fans most often encounter, tertiary sources, compilations of historic facts compiled by others separated by time and experience from the original event.  My spread sheets are tertiary sources.  They are useful to us and they allow us to “know” a lot more about some particularly arcane bit of history such as the journey of NEOX 238, but they may contain errors, certainly contain judgments, and if used enough, get accepted as “gospel” by the community.  Two well documented examples of errors propagating and repeating in derived works are the “drawbars” between Santa Fe’s FTA and FTB units and the “blind center drivers” on the Santa Fe’s 3800 class 2-10-2s.  Neither of these widely accepted “facts” is true, yet they are continually raised in support of someone’s argument in rail fan discussions.  And worse, they have a tendency to crop up as inaccuracies in otherwise exquisite models.

We as amateur historians have a responsibility to future generations of scholars and rail fans to get things as right as we can, acknowledge errors and correct them, and preserve as best we can information for those who will discover the joys and grit of this hobby of ours when we are the unknowns to them that we are grateful to today for the images of days long past.

Here's a photo of MOBX 228 graciously supplied by Richard Hendrickson.  The WEOX cars were later re-marked as MOBX and this is a very likely sister. 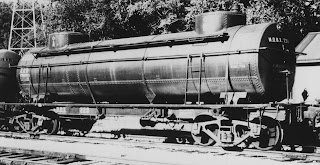 An aside, looking for the above, I just found a car that I’ll have to build: True’s Oil Company TOCX 10, a 6,429 Gallon 60K capacity car out of Spokane, Washington.  True is our 5 year old Andalusian Filly who has been on a diet including Rice Bran Oil. 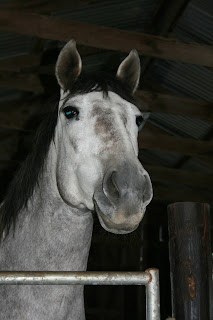 Who say’s that research is dry and boring?  I can represent it with a small silver tank on arch bar trucks.  I can route it from a processor in Stockton to Cotati via Richmond and Tiburon and use the car float as well.  And my horse will have the oil she needs depicted on the layout. 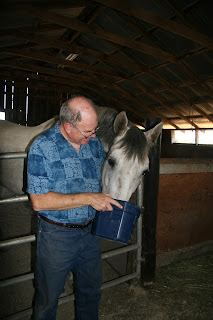 This closes with one more coincidence or serendipitous occurrence in life; a fitting inside joke that melds two of my hobbies: living and iron horses.
Posted by North Bay Lines at 7:54 AM No comments: