I’ve had a pleasant day giving Raisin his Christmas treat of apple cider and working on the blank forms for my car cards.

It turns out that both Car Card & Waybill (CC&WB) and Tack on car are prototypical car forwarding methods used by the Santa Fe.  Yard clerks did tack route cards onto the 1:1 scale box cars, so an appropriately labeled thumb tack on an HO car would at least have a basis in prototype reality.  That said, that thumbtack looks grossly oversize and detracts from the visual appeal of the model.  Don’t think I’ll be using that method.

Which brings us back to CC&WB.  Most of us are used to the Old Line Graphics CC&WB system with the two/four sided way bill sliding into a car card pocket.  I’d like to use more prototypical paperwork for my car forwarding, along the lines of what Tony Thompson and others have been advocating over the last decade or so. As it happened, Santa Fe, used an Empty Car Bill and Home Route Card, Form 1850 Standard, to get those pesky foreign freight cars off the railroad and back where they came from.  The destination agent was responsible for filling out the 1850 from the inbound waybill so the car could be properly routed home.  Using a bit of modeler’s license, I am shifting that responsibility to the originating or junction agent so the card can take the place of the Old Line Graphics car card and always move with the car.

I am fortunate that the 1944 version is among the forms published in the Warbonnet a few years back.  I have duplicated it at ½ scale in Word and can print a sheet of eight blanks on a letter size sheet of cardstock.  In the same issue they also published a 1944 Meat Car Card. 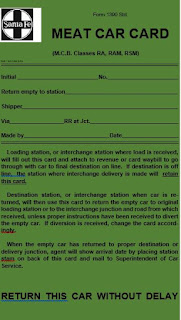 I have a few meat reefers that will originate off layout on the SP at South San Francisco.  The original was a little shorter than the 1850, so I was able to fit twelve into the same letter sized sheet.  And like the original, I will use green cardstock, which will help prioritize getting the empties home for another load.

Next, is a card for Consigned Empties.  The original Form 1851 Standard is white cardstock with green ink, something I can duplicate on a color printer.  That’s the good news, as is the twelve blanks on a sheet.  The bad news is that this form wasn’t in use during 1944, nor was it in the 1947 index of blank forms and the published example dates from 1965.  It is useful, though, for cars in assigned service and was a good idea.  Plus, it makes things more obvious to the casual operator, so with a bit more modeler’s license, I created a version as it might have appeared in 1944 by combining the elements of the 1965 version with the look of the 1944 Form 1850. I will use this version for the auto parts cars bringing Jeep components to the Ford plant in Richmond’s Inner Harbor. 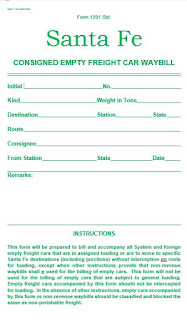 (My interpretation of what could have been)
Next is a bit of speculation.  The 1947 index has a Form 1391 Standard, Empty Tank Car Card, listed right after the Form 1390, Meat Car Card.  I’ve not seen a real one, but would like to confirm my assumptions.  I modified the format of the 1390 to include the last contained lading, important for empty tanks, and eliminate the MCB classes, as a tank is a tank.  I’m not sure what color cardstock to use, green, buff, white, or some other color.  Below is my interpretation of how I think this Tank Card might have looked.  And yes, they were supposed to return on non-revenue waybills, but this specialized card could have served that purpose. 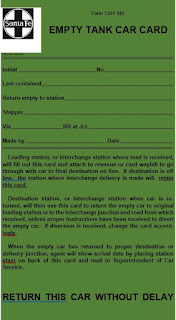 For now, I’ll run with black ink on green cardstock.  That gives the same sense of urgency and differentiation that the Meat Reefers get and facilitates the prompt return of a scarce, in-demand freight car.  In future posts, I’ll describe how I plan to implement the waybills to go with these car cards and also explain the Santa Fe way of labeling the myriad of forms that made the railroad run.  I think that using the specialized car cards that the prototype actually used makes a lot of sense and will contribute to that sense of time and place that I'm trying to achieve as the US gears up to defeat the Japanese Empire at the close of 1944.  Now if I can find suitable prototypes for locomotive and caboose cards . . .

Santa Fe purchased 500 single sheathed auto cars from the Pressed Steel Car Co in 1930.  They were essentially 50 foot versions of the Bx-11 and 12 variants of the ARA single sheathed 40’ box car design.  The cars had 4-5 recessed Dreadnaught ends with square corners, radial steel roofs, ARA steel underframes, hat section Pratt truss side frames, KC air brakes, Ajax geared hand brakes, double 6-7-6 Youngstown doors over a 12’ opening, and Dahlman 1-level trucks.
Below is an in service photo of 66299 with a re-weight in San Francisco of 9-36. 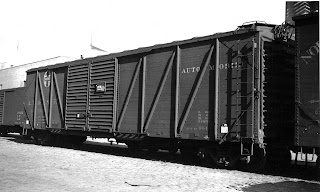 Santa Fe converted the entire class into Bx-35 box cars in 1940 when nearly all of the Fe-U’s became single door cars.  The seventeen cars in engine loading service remained as Fe-Us till 1943 when they too were converted.  All 500 Fe-U’s survived to become single door box cars.
After the war, Santa Fe re-built the Bx-35s with steel sides and 8 foot doors and they ended up looking very much like the Fe-21s.

It’s been difficult to find photos of the single sheathed Bx-35 and so far, I haven’t found one of a complete car.  Absent a full body roster shot, the next best thing is a Jack Delano photo of an Fe-22 at the KC team tracks in 1943.  This shot shows a partial view of the A end of 150312.  The aux door is visible and appears to not have been changed from it’s Fe-U days, but may have been welded shut. 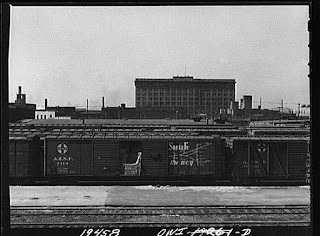 If any one has a more complete single sheathed Bx-35, please contact me at NorthBayLines@att.net.


Posted by North Bay Lines at 8:19 PM No comments:

I presented a clinic last week at the Santa Fe Railway Historical & Modeler's Society at their 38th annual convention in Chicago.  I promised to provide the handouts electronically then had connectivity issues.  Well, that has been solved and the link to the San Francisco Fleet folder on Google Drive is below:

There you will find three PDF files with listings of the vessels and boat flats along with some selected slides from the talk that include a number of deck plans and other drawings.

Thanks to the new job I took in the fall of 2014, I now work about a mile from one of the best, most complete libraries in the world.  I learned about the Accounting Codes from Tony Thompson’s blog back in 2012 http://modelingthesp.blogspot.com/2012/08/railway-accounting-code-numbers.html.  Tony linked a PDF of the 1950 codes which I downloaded and cross referenced with the 1922 version I found on Google Books to come up with my best guess as to what was in effect during my modeling era of 1944 I previously wrote about them in 2014 http://northbaylines.blogspot.com/2014/01/interline-codes-what-are-they-and-where.html and posted a spreadsheet of those results linked in that post.

Recently, I obtained a 1949 edition of the Railway Accounting Rules and discovered the richness of the additional information in these volumes.  Seeing the changes of the Code list from 1949 to 1950 set me on a path to see if I couldn’t get my guestimated 1944 list validated or replaced with something more accurate.  Al Daumann was kind enough to send me copies of the waybill form from his 1946 edition, which was subtly different than those of my 49 edition.  That got me even more interested in finding the exact “right” stuff.  Google Books turned up a 1921 version which I downloaded and Hathi Trust had darned good search only coverage for my year of interest.  I was about to make an interlibrary loan request when I remembered that great institution up the Hill from work.  Capitol Hill that is.  Doing an online search of the Library of Congress told me that they just might have what I was looking for.  Detouring through the Jefferson Building on my way to Union Station (I ride the MARC into the city) I was able to request the 1940 through 48 editions and set up my card for online requests.  The reference librarian cautioned me that all of them might not be available, but ask for what I wanted.  When I went back two days later to view them two days later, waiting for me were the 1941, 42, 43, 44,45, 46, 47, and 48 editions.  All in pristine condition with tight spines and no wear. 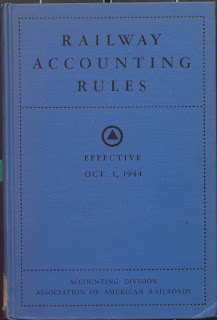 I came prepared with my DAD (Digital Acquisition Device, aka Canon 30D DSLR) and proceeded to photograph the Code Pages of several copies before the reading room closed and I had to catch my train.  I repeated with additional additions the next week, then discovered the book scanner.  I now have good quality PDFs of the Code listings and the Waybill forms by year.  More on the forms in a later post.

Well how did I do on the interpolation?  There were 705 Codes effective 1 Nov 1944 of which I got 497 correct.  I had 18 that had errors, 10 incorrect names and 8 wrong code numbers.  Three of those were kind of important for my RR C&O, SP, and Bamberger had differences in the Name and would have thus had incorrect waybill headers.  I included 11 that didn’t come until later, including the Oakland Terminal where some of my traffic originates.  And I missed 192 railroads with codes, the most important ones to my layout were the Alton, Yosemite, and Virginia & Truckee.
I have entered the data into Excel and the correct 1944 Accounting Codes can be found at:
https://drive.google.com/open?id=1V1PLbPnMjFEHGhI9XXUKtAMFl8IjJCYQ
If you are interested in the codes for additional years between 1936 and 1950, let me know and I may be able to provide additional lists.