Much has been written by many about free rolling box cars, freight car distributions and the proportion of home road to “foreign” cars.  Based on a multitude of sources the literature suggests a ratio of more foreign than home cars.  Thanks to a fortuitous discovery at the California State Railroad Museum Library last week I can report some actual numbers month by month from January 1934 to December 1943.  The end date of the available data 12 months before my chosen modeling datum of the January 1945 ORER.

What led to this discovery?  The search for the original numbers of the Bx-11 and 12 cars rebuilt with extended height roofs.  I was trying to find the records of equipment changes of when the cars were renumbered into the higher number series that had the correct, rebuilt dimensional data in the ORER.  I did not find that, yet, but have a better idea of what to look for.  Craig Ordner at Temple, I have an inquiry in preparation.  Katherine Sanchez of the CSRM Library, located a possible source and pulled it for me last week.  When I visited last Friday, I was initially disappointed as the desired information wasn’t included in the volume that I had time to view.  What I did find, though, was fascinating and way too much to digest in a few hours.

The CSRM holds two volumes of a Santa Fe Equipment Survey, May 1, 1939 and revised to July 1, 1944.  Fits my era to a Tee!  A brief summary of their contents include listings of freight, passenger, and locomotive equipment: descriptions of freight cars, passenger cars & locomotive classes; assignment of switching locomotives to locations by class; projected equipment retirements and purchases; charts showing line profiles & helper districts, and the subject of this post, tables of system & foreign cars on line and system cars off line.

The summary page of freight car descriptions is shown here; 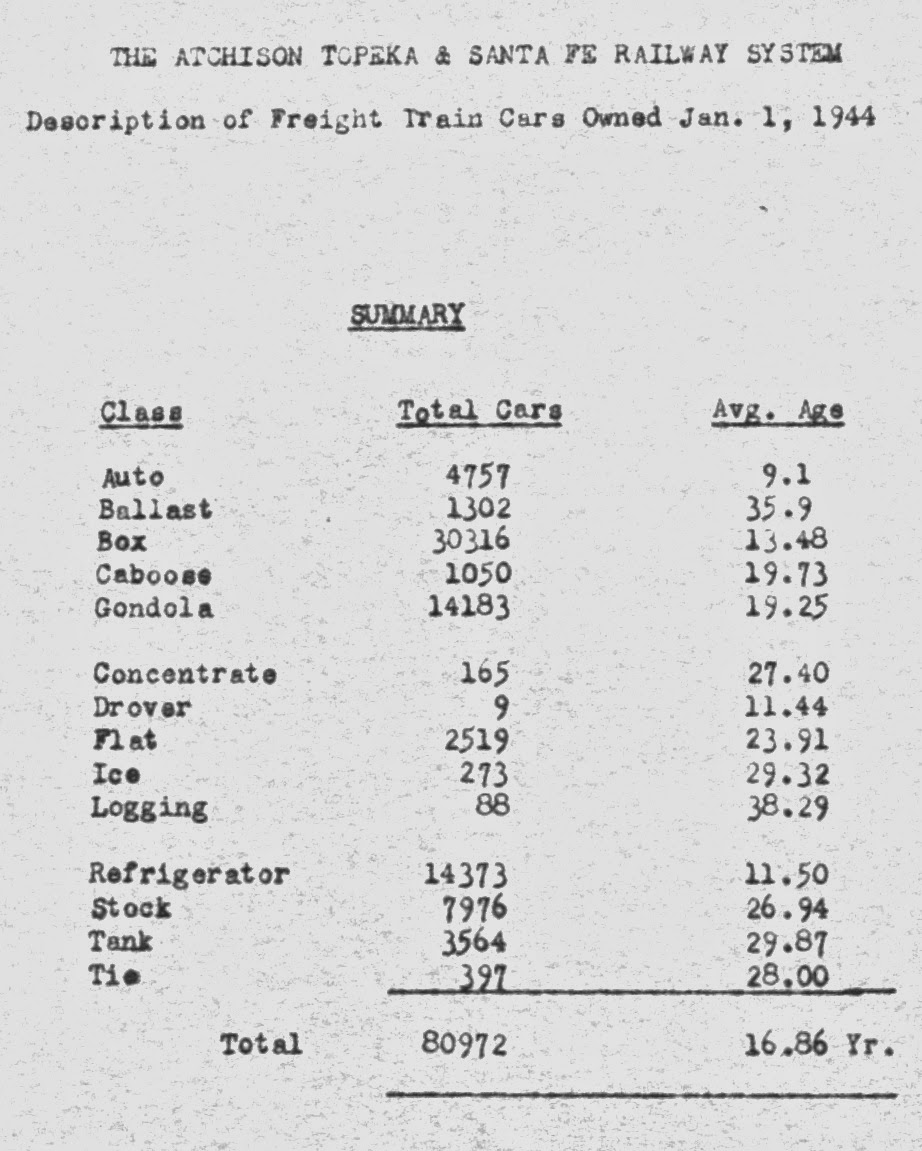 As mentioned above, the two page data table covers 1934-43, month-by-month broken down for Automobile, Box and Refrigerator Cars as shown here. I've transcribed the numbers as I found them except for the one highlighted in yellow.  The original reads 8291, an apparent typo, since the totals of Feb and Apr of that year are the same and consistent with an on line total of 3291.  No record exists of procuring 5000 Auto cars in one month and disposing of them by the next.

A second table shows the total of the three types and the number of foreign cars borrowed each year for peak loading.  A summary chart of the ATSF cars off line and Foreign cars on line is here. 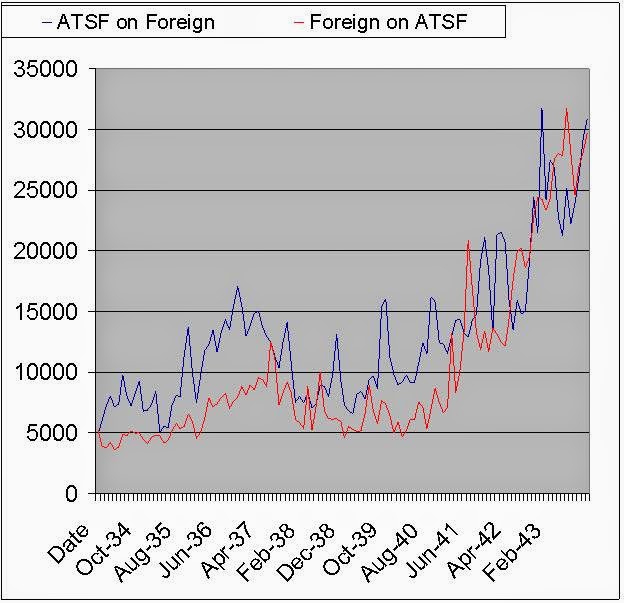 More analysis to follow, but a first look says that the number of foreign cars on the Santa Fe was much lower than previous assumptions in the model press, at least for the years 1934-39.  The numbers increased significantly as the country came out of the depression and entered WWII.

The curious case of the relocated doors

I spent some time at the CSRM Library over the last couple weeks looking at box car photos.  Yeah, yeah, we’ve all heard the refrain that if you’ve seen one, you’ve seen ‘em all.  Well I’m here to tell you Joe, it just ain’t so.  Case in point Santa Fe Fe-24 13077 photographed at the Topeka Shops on 26 November 1954.  True, it’s past my era of 44, but the file was there and it is Santa Fe . . .  The car was an example of the rail industry going the extra mile to meet the needs of it’s customers in the Auto industry.  Modified at Topeka for Fisher station wagon bodies from former Chrysler-Desoto body cars, this was given a raised roof, not unlike the aircraft parts cars during the war.  Several other photos are in their collection of raised roof Fe-24s and they look like Fe-24s with a side extension stacked above the side walls.  The roof on 13077 looks the same as the others in the class with the extensions.  But here is where it gets curious, the sides look different.  I looked at a dozen other Fe-24s and they all had the same panel configuration of 4 to the left and 7 to the right of the double door opening.  This is the same pattern produced by Charlie Slater as masters for the Sunshine Fe-6-20 kits.  The side sills differ, but the two door 50’ steel cars of Fe-6-25 all share the same 4-7 riveted side panel configuration, EXCEPT 13077.  This car has 4 1/2 panels to the left of the doors and 6 approximately equal panels to the right.  Counting the roof panels reveals that the doors are moved to the right compared to a standard Fe-24.  Details of the large reinforcing tab running below the doors also show it moved to the right, with its far right end slightly overlapping the sill tab just inboard of the bolster.  On other cars, there is a foot or two gap between the under door tab and the small cross bearer tab.

I will have to get permission to post a copy of the photo.

Santa Fe had a large fleet of 4395 AAR class XA cars in January 1945 plus 298 Fe-24 class cars equipped for passenger service.  About 40% or 1902 cars were 40 footers the rest, large 50 foot cars.  126 forty foot and 356 of the fifty foot cars had operable end doors as listed in the ORER.  I state it that way as a number of cars retained their end doors that had been sealed at some point in their careers.  The numbers here are derived from the Santa Fe ORER listings in the Jan 1945 ORER.  I previously posted a link to my Excel spread sheet transcription in my first post in this series.  I have adopted Tony Thompson’s methodology of using a defined fraction of the ORER fleet as a representative sample for my modeled fleet.  The base number I have chosen is one modeled car for every 250 in the ORER.  I figure I will need about 1200 cars overall and that I want to have 1/3 home road cars and that gives me a good sample.  That gives me a target of eight forty foot and nine fifty footers plus a passenger Fe-24.  OK, that’s the starting point for the analysis, but the XA and BX cars were not truly free rolling like the rest of the box car fleet, much being in captive service or limited express service.

I’ll tackle the express service first.  Like Lays potato chips, one green and gold Fe-24 is not enough.  I have no evidence of express cars on the Golden Gates, but they were used on the Scout and Grand Canyon.  Not every train had them, but a car would not show up day after day, different cars are needed.  So, at least two passenger lettered Fe-24s.

Extended height cars.  Santa Fe rebuilt a number of cars with higher roofs during the war and assigned them to carry aircraft parts.  Richard Hendrickson describes many of those assignments in his excellent book on Furniture and Automobile Cars, in stock on the ATSF Railway Historical and Modeling Society web site at http://www.atsfrr.org/store/bookFrt.htm.  Richard states that 40 of the Fe-8s were used to load A-20 fuselages in Detroit and carry them to Douglas Aircraft in El Segundo.  So here is an example of where you are modeling makes a difference in what you see.  Modeling the El Segundo branch, you need a bunch to spot at your aircraft plant.  A bit further south on the Surf Line, you need other aircraft parts cars for the parts to and from the San Diego plants, but not the El Segundo assigned Fe-8s.  If you model Cajon, you need more than the system wide fraction, as they would be frequent travelers to the LA basin but you need the San Diego assigned cars too.  Raton, maybe not, but maybe some.  Flint Hills and the Belen cut off, yes, but maybe not as many as Cajon as some of the traffic might be on Raton.  If you model the Alma or Howard branches, you might see one on a passing main line train.  Tehachapi and the Valley Division to Stockton, you would see the cars moving assemblies between SoCal and Washington state  And if you are west of Stockton with no aircraft plants or industries making large aircraft parts, you don’t need any as they were in dedicated service elsewhere.  So for my line that models the west end of the third district, I don’t have to worry about finding those cool Westerfield kits of the extended height cars.  A bit of a disappointment for this pilot, but hey, one of the advantages of modeling your fleet on the prototype is figuring out what NOT to buy.  And if you are like me, you already made a lot of this is cool purchases over the years.

Regular Auto cars.  I think I may need more than the proportional fleet share as I am modeling the Richmond Ford plant and Chevrolet had a large truck plant in Hayward on the SP.  A large number of XAP cars would have been in dedicated parts service carrying jeep engines, seats, bodies and other parts from their eastern suppliers to the plants.  And like the aircraft parts cars, they would be turned immediately back to the suppliers for the next load to keep the production lines humming.  A great two cycle waybill, but multiple cars are needed to account for the travel time to the source.  Of course, Santa Fe wasn’t the only road in the pool, but the foreign cars are the subject of another post.  And the XARs would have delivered military vehicles to the San Francisco Port of Embarkation in Oakland for shipment overseas and moved assembled trucks from Hayward and Jeeps from Richmond East.  With this heavy vehicle traffic, I am thinking that I may want to double the proportion of  non-aircraft loading double door cars while zeroing those taller cars.  For sake of simplicity, I will exclude all cars over 10’6 inside height which is a total of 180 Fe-8, 13 and 15.

The Table below lays out the number of cars in each class, models needed and on hand.

I didn’t count any of the old Athearn Blue Box cars in my have column.  I have a bunch, and as stand ins for the missing classes they will serve, but I do intend to replace them.  Of the quality cars and kits I do have, only three are in excess of needs and at least one can be used to represent a combined Fe-9/10 grouping.  More on modeling this group of cars in future posts.