I enjoyed operating John Zach’s Sierra last month.  I especially liked seeing a freight car fleet that matched my era and had a number of signature cars that I will have to duplicate.

Looking for info on the Santa Fe and SP California car loadings at the state archives, I came across som of the Sierra's annual reports to the Cal RR Commission.  Several of them are filed in a box with the part of the SP's reports and I just had to peek when the archivist brought the whole box.  Traffic on the Sierra was a lot lower than that of the SP or ATSF and many of the commodities didn’t make it to their rails.  Since John was such a gracious host, I transcribed the 1945 data into the spreadsheet that I’m using to analyze the Santa Fe traffic and sent him a copy.  A recent OPSIG post mentioned 1952 Sierra conductor’s books and most of the traffic was lumber.  I went back and looked at my transcribed data and it fits the OPSIG observation.

Below is a summary of the carloads and tonnages by commodity class.

If you download it, you can see that the 11 carloads of animals were horses or mules, and that lumber and lath made up the bulk of the forest shipments.

This was an interesting set of data to analyze as it represents what would be typical on a branch line and you just don’t get this kind of detail for short sections of the Class I railroads.  With the average car count of 12/day, this is a traffic level that could be modeled without compression.

Cameron Park, CA
Posted by North Bay Lines at 7:31 AM No comments:

Author, Aviator, Teacher, Freight Car Historian Richard Hendrickson departed this world too soon for those of us left behind during the last week of June. 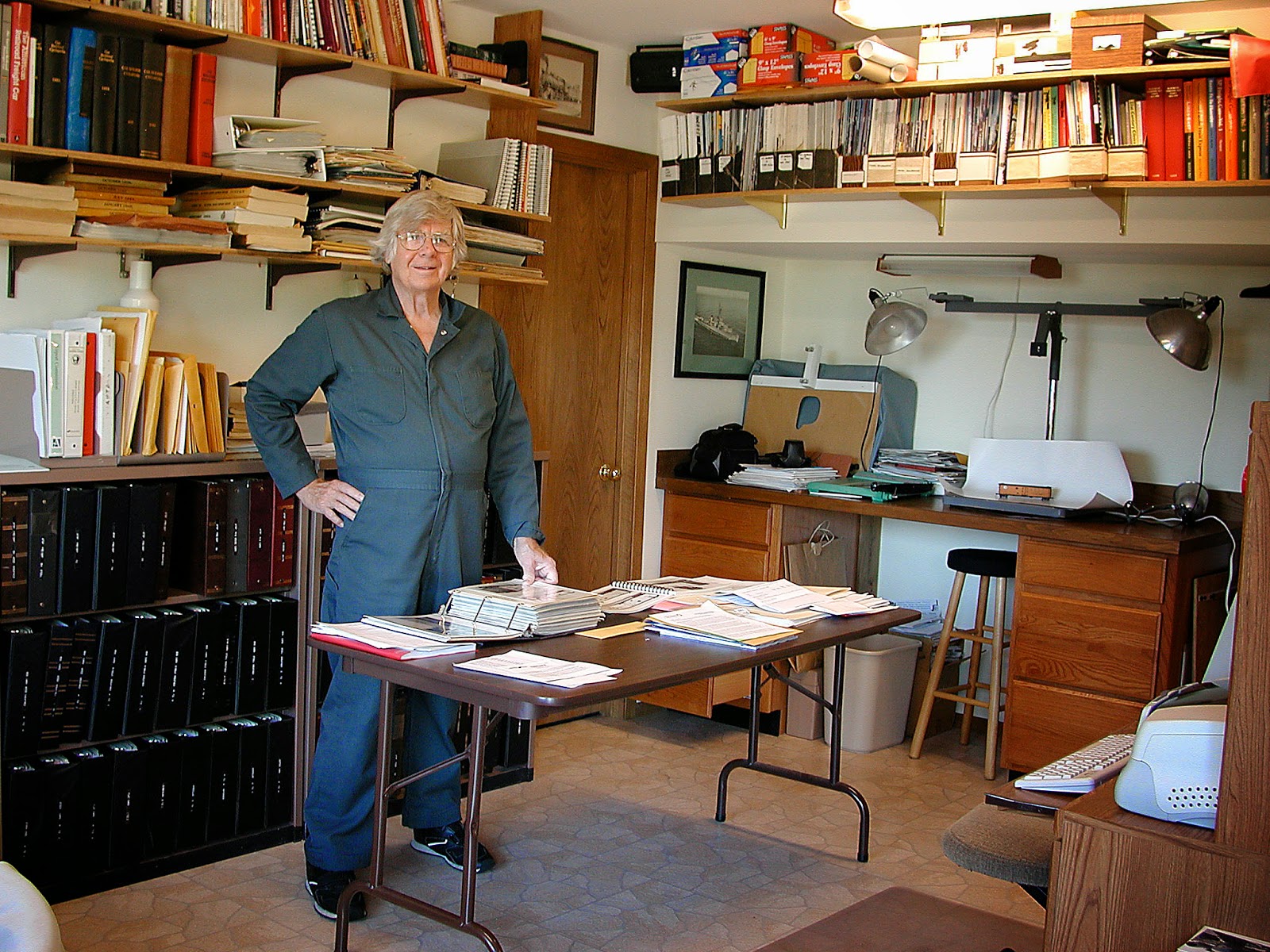 I knew Richard for over twenty five years, but did not know him well enough and was a fool for not getting to know him better. Our first and last face to face encounters were at Santa Fe conventions, the first in the late 80s where I was afraid to approach this great guru, the last in Flagstaff last year.  That was as always too short, with interruptions at such events as everyone seemed to want a piece of his time. I had a chance to exchange a few words with Richard and Tony Thompson as we moved through the buffet for dinner.  I did come to know him better through exchanges of email, the last where I asked his advice on QC’ing my input for painting this current Shake_n_Take project.  Richard confirmed my synopsis, but gently suggested one detail that I had forgotten.  I did update my post http://northbaylines.blogspot.com/2014/06/colors-markings-of-2014-shake-take.html to incorporate that extra detail.  We will no longer be able to make those casual queries that were answered so completely and rapidly.

Richard surprised me earlier this year when he purchased one of my excess brass locomotives.  He had done the original data package for it back in the 60's and wanted an intact one for his diorama.  In packing it, I noticed it was missing a step.  The conversation about what to do was the first I had with Richard by phone.  Fortunately I had a second loco of this class, although it had foam residue which we agreed to substitute as he had to have it stripped to paint anyway.

Richard was very generous of his time and knowledge, and gave me advice on interpreting hand scrawled notes of freight car numbers in response to a query I made of him regarding correcting sources last year.  That advice came with an unsolicited photo of a two dome tank car that was very likely as sister to the one that I had enquired about.  My original post can be seen here: http://northbaylines.blogspot.com/2013/05/sources.html and  Richard’s reply to me follows:

John, those of us who have worked with conductors' time books, switch lists, etc. well know that the handwriting of trainmen and switchmen was often obscure and sometimes illegible, and those errors have often made their way into transcriptions made from those handwritten documents.
So I have no doubt that what was seen as an "N" was in fact a "W" and that the car in question was a WEOX car, especially since the number matches.

White Eagles was, of course a Kansas City-based subsidiary of the Socony-Vacuum Oil Co. (that is, Standard Oil Co. of New York).  The cars of all the S-V midwestern subsidiaries later were combined into a single fleet with SVX reporting marks, and still later the name was changed to the Mobil Oil Co. with MOBX reporting marks.  Car numbers, however, often did not change, and I'd be willing to bet that the attached photo of MOBX 228 shows a car in what was formerly the WEOX  200-249 series.  At any rate, it was a two compartment 8,000 gal. car (and those are pretty rare) and was built by GATC in the mid-1920s.

In 1943 Mobil did not market retail products in the Pacific Coast states, but of course tank cars were pooled under the wartime authority of the federal government, so at that time a WEOX car could have been routed anywhere. 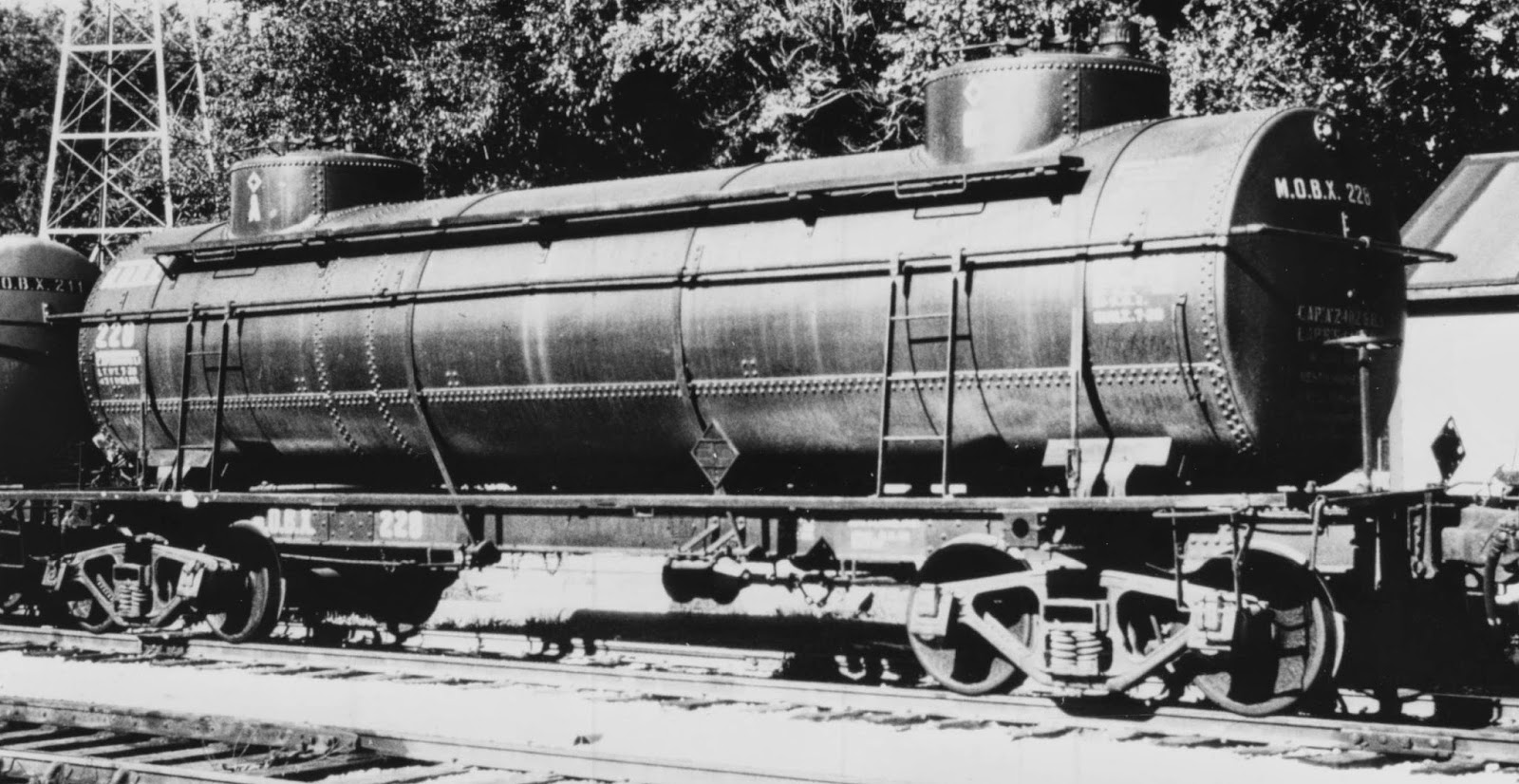 WEOX 238 was interchanged from the ATSF to the SP at Port Chicago in November 1944.  It will become a fixture on my eventual layout.

The above interchange demonstrates the thoughtful, gracious, generous person that he was.

We will all miss Richard for who was, a friend, fellow flier, historian, modeler and teacher.  He taught us much throughout his life and has left a legacy through his work, his friends, and his admirers.  He continues to teach us from the great beyond through his legacy.  But even his sudden departure has a lesson in it, that life is unpredictable and that we should live it well as any day could be our last.  That is a lesson that I have failed to heed in the past and resolve to pay it more heed.

My deepest sympathies to Richard’s wife Sandra, their family and friends.