Unpacking my books I came across Gateway to Victory, The wartime story of the San Francisco Army Port of Embarkation.  I had purchased it about 10 years ago and was excited to find a detailed history of the largest rail customer in my chosen locale and era.  The book documents the activities of the principle Army port for the Pacific Theater during WWII.  It starts with a brief history of the port and Fort Mason and Benicia Arsenal then continues with the expansion of the port to Oakland Army Base, Alameda Air Depot, Camp Stoneman, Parr Terminal and Fort McDowell. 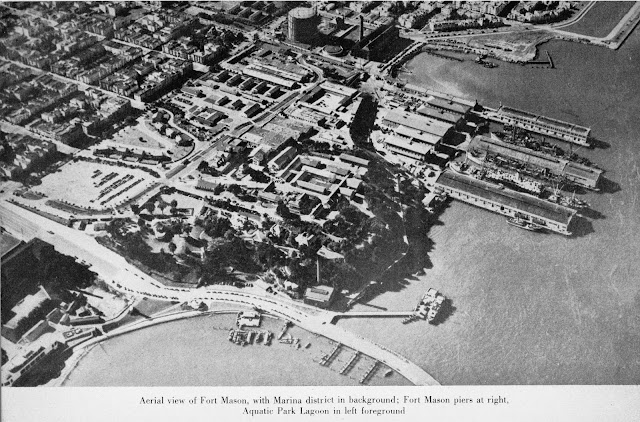 Fort Mason, along with piers on the Embarcadero was the loading and unloading point for nearly all of the troops passing through SFPOE.  Today, a Safeway store occupies the block with the large storage tank and the pier buildings are managed by the National Park Service. 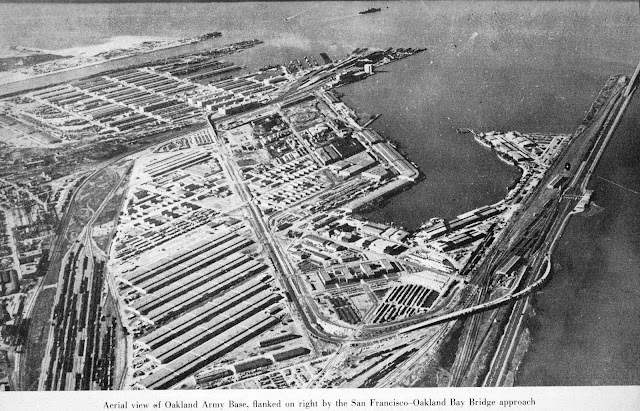 Oakland Army Base in the foreground had 16 berths for loading ships along the waterfront between the Key System approach to the bay bridge on the right and the SP Oakland Mole at the center top. Large warehouses with direct rail and truck access are just right of the SP and Oakland Terminal yards at the lower left.  The Naval Supply Base is the group of warehouses and piers on the far side of the SP tracks leading to the Mole.  The WP's freight slip is beyond the Navy base on the near side of the channel.  Alameda Naval Air Station is on the far side of the channel in the upper left. 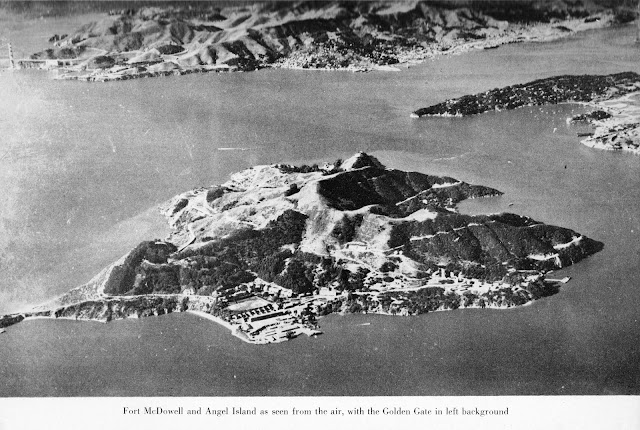 Fort McDowell on Angel Island was used for Prisoner of War (POW) processing.  Fort Baker is on the bay side of the Golden Gate at the upper left.  The NWP car float apron at Tiburon is visible at the mid-upper right.  Marin Ship in Sausalito is at the far-upper right. 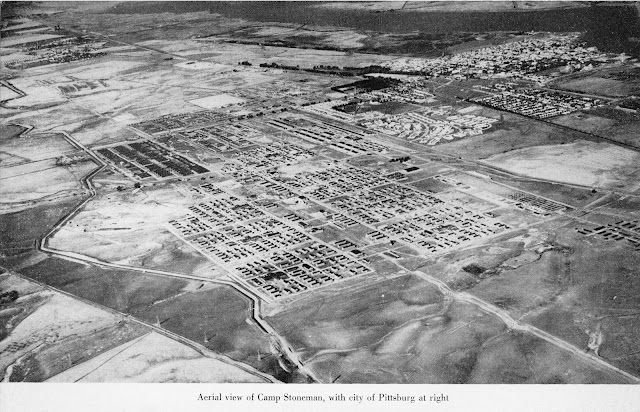 Camp Stoneman provided facilities to complete overseas processing and training for army troops bound to the Pacific Theater.  Most arrived in unit moves from points east in MAIN trains.  Troops debarked from their trains in Pittsburg from either the Santa Fe or SP.  They then marched or trucked into the camp south of the SP tracks. 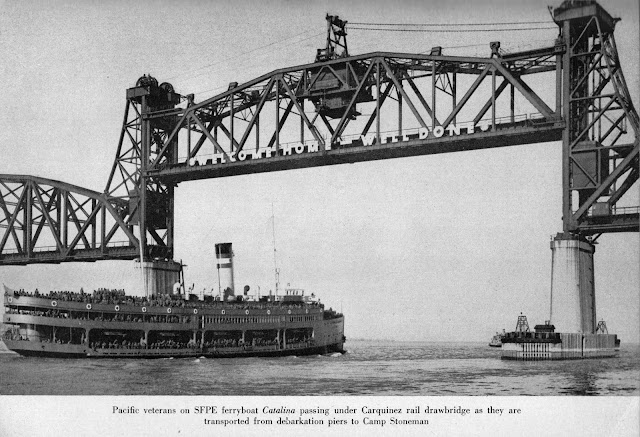 Geographic separation of the components of the port meant that troops had to move to the piers when it was time to ship out and from them to Camp Stoneman when they returned home to demobilize.  The Army used a number of ferry boats to provide transport from a pier on the San Joaquin river in Pittsburg direct to the loading piers in San Francisco, avoiding rail and traffic congestion that would occur with land movement.

Although these troops are going home after the war, they are traversing the reverse of the route that they took to the front.  Loading a MAIN train at Pittsburg.

Emeryville was the home to the port vehicle section.  They prepared all vehicles for shipment.  Here they unload a DUKW from SLSF 152203 onto a Boston & Albany flat.

What would you expect to see looking in a group of freight cars in December 1944?  What should be the oldest NEW/Reweigh date?  Service date on the brakes?  In that era, the brakes needed to be inspected and truck journals repacked every 12 months.  Cars in revenue service other than those billed by gallonage, e.g. tank cars, had to be reweighed every 30 months.  So while Patton's Third Army was struggling to relieve the 101st Airborne at Bastogne, car knockers in Richmond and Oakland were sending cars last weighed on or before June 1942 to the scales to update their weights.  But what combinations of BLD and Reweigh dates would you see?  By December 44, cars built in June 42 or earlier should have been reweighed at least once.  Santa Fe's original curved line map scheme that was applied Dec 40 to April 41, what would the dates be on those unique cars?  If they were done right on time, the repack dates would range from 6-10 1944 and the reweigh dates would be 6-43 to 10-43.  The table below shows the dates at 30 month intervals you would see if a car was in continuous service and weighed on time.


For my December 44 scenario it should hold true for most cars built in 1937 or later, as they are likely to have been active in the war build up.  As the weighing and inspection wasn't required if the car wasn't in service, the Depression likely caused deviations from the schedule above.

What is the point of the table above?  Striving for the impression that my layout really is in December 1944.  Any car with a reweigh prior to 7-42 needs to go to the scales and get re-lettered.  If I have two 1937 builders photos, one of a car with an 11-37 NEW date and the other with 4-37, reasonable reweigh dates are 11-42 and 10-44.  That will help me choose what decals to pick from the available RW stencils.  It could also be fun to enlist the aid of my operating crew to note the dates and have the crews route the MTYS to the scales if the weight date is out of range or the RIP track to repack the journals.

Guz Intas and Guz Outas: 1942-3 Carloadings and Commodities on the North Bay Lines

I recently obtained a PDF copy of the History of the Santa Fe Railroad from Barstow to San Francisco from the Western Archives of the Santa Fe Railway Historical and Modeling Society.  They can be ordered from the Society website at: http://www.atsfrr.org/store/DigiHist.htm  I will post a review in the future, but for me, the file has been a gold mine of contemporaneous operational data.  Among other valuable historical documentation, in the appendix was a table of cars originated and received at the various stations along the line for 1942 and 1943.  I copied the data for my modeling area, Stockton to San Francisco, into an Excel spread sheet to help me gain a better understanding of what the traffic.  This information is more granular but less comprehensive than the commodity carloadings contained in the annual reports to the ICC and the California Railroad Commision.  (More on those in the future.)

I had some preconceived notions as to what the traffic sources and commodities might be during the war years based on the San Francisco Port of Embarkation in Oakland, the Kaiser Shipyards and Standard Oil refinery in Richmond, Hercules Powder in Herpoco, the Naval Ordnance Depot at Port Chicago, and the Columbia Steel, Dow Chemical, and Fibreboard Plants in the Pittsburg/Antioch area.  A look at the newly discovered data confirmed some and shattered other assumptions.
Principal Commodities Stockton – San Francisco

As expected, oil and gasoline shipments led the originating freight commodities with 18.5 thousand outbound car loads over the two years.  Surprisingly, it was the second most received commodity with 6858 cars loads.  What was surprising about the oil and gasoline shipments was the origin.  Standard Oil in Richmond only accounted for 58% of the shipments, Port Chicago the other 42%.  How can that be?  Santa Fe only directly served one of the Bay Area refineries and that was in Richmond.  How did Port Chicago originate 42% of the petroleum traffic?  SP served the Shell and Tidewater refineries at Martinez and interchanged traffic to the Santa Fe at Port Chicago.  I discovered that and wrote about it in 2012, you can see that original post here: http://northbaylines.blogspot.com/2012/09/interchanges-2-port-chicago.html   What that detention report didn’t tell me was a tidbit that explains how the Santa Fe originated 7700 loads and terminated 6800 on the SP in those two years.  The traffic had to come from and go to the Shell and Tidewater refineries, as there were no petroleum facilities on the Santa Fe at Port Chicago.  On page 29 of the history, the author, F. B. Baldwin, has a paragraph dedicated to the Antioch-Martinez Switching Zone where both the SP and Santa Fe have access to all industries on either line on a switching basis.  That gave SP access to Columbia Steel and Dow in Pittsburg, and ATSF to the refineries.  And what about the Port Chicago Naval Ammunition Depot that I had planned on moving a gazillion explosive laden boxes to?  Only 107 car loads total since it opened to spring of 1944 when the report was written.  “Most of the traffic moving to it originates in Pacific Coast areas which we do not serve.” (P30)  The truth turned my expectations totally upside down.  But at least my investment in P2K and Red Caboose tank cars is paying off.

Here is a list of the 1942-43 traffic by station.  The busiest was the WP interchange in Stockton, the least busy was Orwood.  And this does not account for the empties, only the loads originating or terminating at a station or coming from or going to an interchange.

This Table shows that Stockton was the busiest place on the Valley Division as it handled nearly 280 loads each day to the interchanges or local industries plus all the through traffic to and from the Bay Area.  WP delivered 3 cars to the Santa Fe for every 2 the SP did and Santa Fe sent about the same proportion to each.  Perhaps it is just as well that I represent Stockton as my east staging, it could easily be layout unto itself with two major direct interchanges and one minor one plus the myrad of local industries.  The relative traffic levels are generally what I had guestimated, but with two surprises.  One, Herpoco had very little traffic and I will have to use my Hercules Powder cars less than I had planned.  Two, Middle River, the start of my on layout locations, chosen for its Bascule Bridge, had a lot more than I knew about.  As you can see in the next table most of that traffic was potatoes.  I may need to include a potato packing house and increase my SFRD reefer count.  That, or I can plan my ops sessions to avoid the potato rush.  I may need to up the reefer count anyway, the history documents the shipment of  550 car loads each year of fresh peaches from one orchard north of Merced to canneries in the Bay Area.  It still won’t be the solid reefer blocks needed for Bakersfield or Cajon though.

Much more analysis to do, but most of my modeling selection remains valid, but some of my assumptions and fleet composition need updating.