A Visit to the National Archives

A great deal of information pertinent to my modeling efforts is preserved in the National Archives in College Park Maryland.  The Archives are a pleasant place to do research, but it does take a bit of preparation. 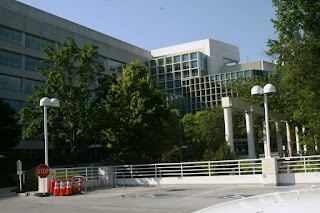 Some of the finding aids are available on-line, but most of the more useful aids are only available in the research rooms.  You need to have a current researcher card to gain access to the research floors, so plan ahead to spend some extra time on you first day checking in and getting registered.  Textual, photographic and cartographic records are on separate floors, so if you need to access all three, plan on a multi-day visit.  And although you can look at records on most Saturdays, you have to have them “pulled” during the work week, so weekend only visits are only good for figuring out what you want to look at when you can come back during the week.  If you are going to look at military files, as I have been doing, get familiar with the Army and Navy file plans for your time frame, available on line.  And they did change how they organized things over time, so reference to the contemporary master file plan really helps determine where to look.

Don’t bring a hand-held scanner, you won’t be allowed to use it.  Do bring a good digital camera it makes a very good “DAD” (Data Acquisition Device).  I have been using my Canon 30D with a 28-135 lens on a tripod with remote shutter release.  You can hand hold, but that gets tiresome.  Ask me how I know.  Your newer smart phone can also work, as can your tablet.  I have copied the finding aid for the Office of the Chief of Transportation with my Kindle Fire.  I now have a copy that I can refer to while commuting.

In my last visit on 27 and 28 May, I finally found some information on MAIN trains and Military Extras.  The MAIN train information came from formerly classified messages from the traffic control division of the Army’s Office of the Chief of Transportation, Record Group 336.  When working with any records, FOLLOW THE RULES!  This goes triple for formerly classified records.  Make sure that the declassification slip and the project number are visible in ALL copies and photos you make of any item that is in a record box that has ANY formerly classified records in it.  Most of the WWII records retain their original classification markings and were declassified in bulk.  Without the numbers from the slip, you will have a very hard time proving that the Secret document on your hard drive isn’t any more.  Having your hard drive confiscated is not something that you want to deal with.

And here are a couple examples of what is there you can click to enlarge: 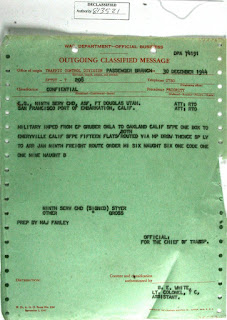 Here’s one that I’ll need for Camp Stoneman: 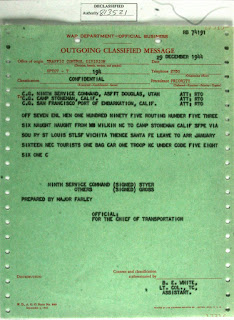 7 Officers, 195 Enlisted Men arriving Camp Stoneman, CA from Wilken, NC on 16 January.  Consist of NEC (Necessary) Tourist cars, 1 Baggage (BAG) and one Troop Kitchen (TC). Routed Southern, Frisco, Santa Fe!  How many Tourist cars were necessary?  Army policy was to not have two enlisted in an upper, so the capacity of a section was two EM in the lower and 1 in the upper.  With 195 enlisted, that meant at least 65 sections.  Officers usually travelled in standard Pullmans, but apparently not in this case.  They did not have to share a berth though, so a max of two per section for 4-7 more or 69 to 72 total sections for the troops in this move.  To that, each sleeper also carried its Pullman porter and I think each train also carried a Pullman conductor, but I am not certain.  To accommodate all the troops and the Pullman personnel, would take at least six 13 section tourist cars.  If Pullman were able to provide four 16 section cars plus another of any capacity, they could have reduced the number of cars by one.  This is a good modelable MAIN train for me with a baggage car, three 13s, Troop Kitchen, three more 13s.  Time to get cracking on building those Branchline 12-1s as 13s tourist cars with Tom Madden’s non-AC roofs.

Remembering those who gave their all.

I had the privilege today to be present at the 148th Memorial Ceremony at Arlington National Cemetery.  I have visited a couple times in the distant past, but today was the first time that I attended a formal Memorial Day Ceremony.  There was quite a line to get in through security, though it moved quickly. (TSA, you could learn something from the Secret Service and the Army)
The gentleman behind me was complaining to his wife that the line was so long and that the uniformed service members were also waiting in the same line.  Maybe I should have shared my thoughts: “A long line for today’s ceremony means that the people care enough to honor those who did lay down their lives for our country.”  And “Our service men are citizens too.” 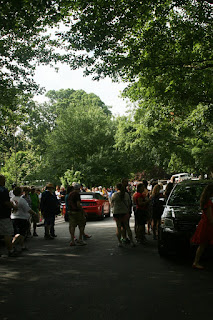 And they kept coming, this view is just as I got to security, the line is no shorter than when I started.

But it wasn’t just Americans who came to pay their respects today.  A group of Germans were not too far ahead of me in line and ended up across the aisle at the ceremony. 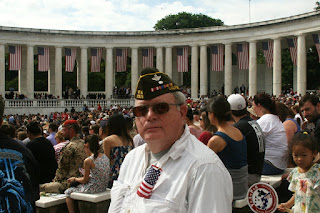 And they too, rendered honors at the playing of Taps. 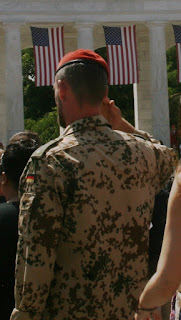 The VFW was well represented in the color parties.

I heard my first live 21 gun salute during the arrival of the official party.  All of the speakers spoke well and gave respectful honors to those who gave their lives for their country. 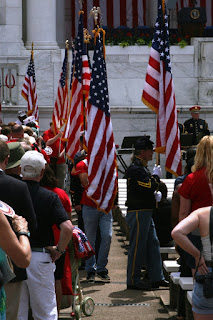 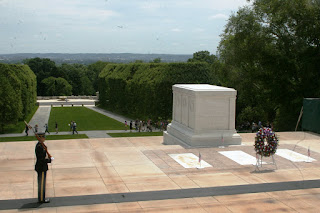 After the ceremony I visited the Tomb of the Unknowns.

Exiting the amphitheater, I came across a pair of group headstones that have special meaning to me.  I learned of both sets of deaths on the flight deck of a C-130 while prepping for a training mission.  The first, in 1980, was the calamity at Desert One while attempting to rescue the hostages from Iran.  That event inspired me to volunteer for Special Ops flying.  I didn’t know any of the men involved personally, but they did have an impact on my career. 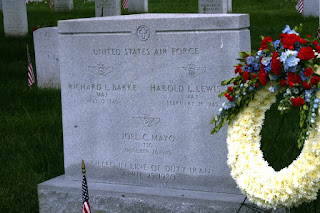 The second incident memorialized here really hit me in the gut.  I was prepping for my first flight in the C-130A at Wright-Patt when my instructor came out late and said the Space Shuttle just blew up.  Frank said it so nonchalantly; we all thought he was kidding to explain his tardiness.  Only after we returned from the flight and saw that endless loop of the video of the explosion, did the reality set in.  I lost two people that I did know.  The Commander, Dick Scobee, was the son of my Air Force Academy Liaison Officer. 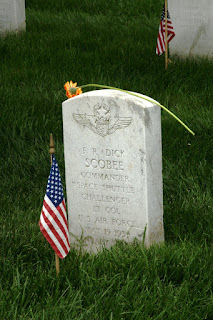 Ellison Onizuka had taken time out of his schedule as an instructor at the USAF Test Pilot School in the summer of ’77 to teach a young cadet how to operate and program the HP calculators that they were using for data analysis. 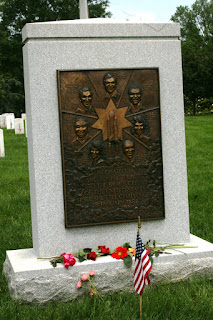 That young cadet was me.

Today was a moving day for me.  One where I recalled the memories of many comrades who are no longer with us like Tony, one of my loadmasters, killed in the LAPES demonstration crash of 1987 or my classmate, Gary, whose parents told him he couldn’t come home if he quit the Academy.  Gary went home in a box.  They live on in my memories as do the thousands of others living in the memories of their comrades, friends, and loved ones.