You have surely heard the old saying that if you want to know what’s going on, follow the money.  This find is a result of that.  Not in the dollars and cents aspect, but from the arcane bureaucracy that came from government regulation of the economy during the WWII emergency.  Capitalism and centrally controlled economies are more than a tad incompatible, but total mobilization to win WWII tipped the scale toward the latter.  The agency responsible for deciding who got what resources and what they got made into was the War Production Board.  To do this, they had to keep track of what industry was doing, so they collected data, reams and reams of it.  But before the internet, the favored means of communication was the US Mail.  Industry had to provide periodic reports that told the WPB how many widgets they made that period, what resources they consumed, etc.  But to make sense of all that, it had to be provided in a standardized format so the WPB clerks could aggregate the info from A.A.A. Mfg. Co., through Ford Motor Company and General Motors Corp. to J.A. Zurn Mfg. Co.

Why did I mention AAA and JA Zurn with the likes of Ford and GM?  Because the WPB needed info from every plant using controlled materials and they are the first 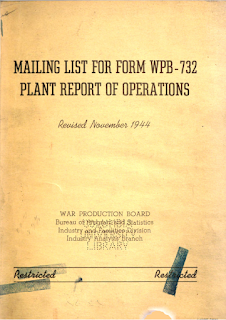 This mailing list allowed the WPB clerks to send out the blank forms and allow us, 80 years hence, to see a large cross section of plants supporting the war effort.  It’s not complete, lacking direct reference to the Army and Army Air Force depots or Petroleum companies, but it does have 135 pages of manufacturers, and their plant mailing addresses.  The data on the pages is explained on the cover page: 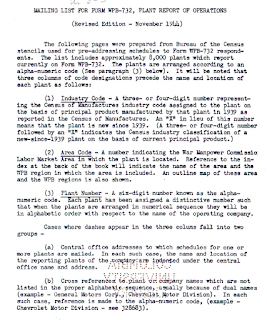 OK, but what did these plants make?  For that, we need a not so super secret decoder ring, the Industry Classifications from the 1939 Census of Manufacturers. 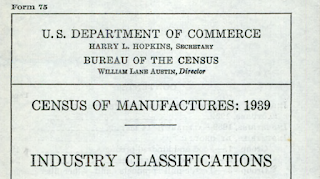 So, for our first entry, AAA Mfg Co, their industry code is 1611, which is in the Electrical Equipment group, Group 16, specifically a manufacturer of wiring devices and supplies. 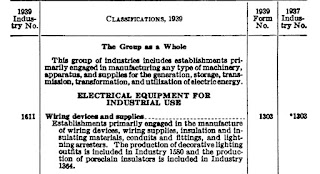 They are in Waltham, MA, which falls in Region 1 for labor markets, with an area code of 017 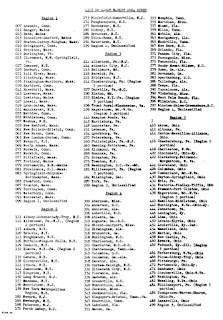 And that is the Boston-Quincy area as shown on the following map from the back of the mailing list: 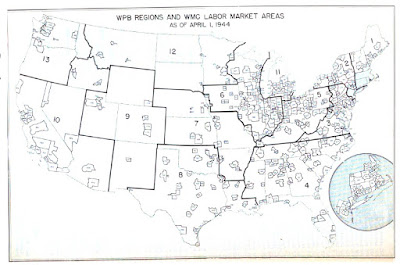 while the Industry Classifications is available on Google Books https://books.googleusercontent.com/books/content?req=AKW5QadOAct7IDmfOFVVtZt4gg1ddDe3XcFDYIIPkb0gycya3iMXQ2nsIkqgsmOwgRXxA8s3f9RxZ2LAW-mm11QZCFlHJklKBLCq0eMqURQohtH0jXBJRj6Yx_PGZIeP7MLm1ThkpLHqWk9J9nWNAH20cNETb8NENaKgsGDMkV4HQ8unzHVgU85bniOhbhCzSB4r2eaSqF6GgV67JbtEq1lmwBSbTRZG65ovdtoeuetot6g4iKzQDog0hT8-WN8KhIYE8vo1dmNzxE9NwVoYhq575RG8m_g2nw

I hope that you find this WWII industry information helpful.

About ten years ago, I discovered a document at the California State Railroad Museum Library that was apparently a justification for an authority for expenditure to revitalize the railroad at the end of WWII.  Among the hundreds of pages related to weight of rail and traffic on certain segments, tonnage ratings for the various districts and a myriad of other info that supported the business plans, were a couple of tables showing the house car fleet.  These tables showed how many Santa Fe box, automobile and refrigerator cars where at home and off line each month from January 1929 to December 1943.  They also showed how many foreign cars of those types were present on Santa Fe rails over the same time period.  With those three numbers, we can calculate the total Santa Fe fleet on those dates, the number of cars of each type on Santa Fe rails, the percentage of the Santa Fe fleet at home and away, and the percentage of Santa Fe and Foreign cars on Santa Fe rails.  Gilbert and Nelson have described a theoretical distribution of free running freight cars where they postulate that the percentages of foreign road cars on a railroad are approximated by the relative totals of cars owned by the various railroads in the US car fleet.  The percentage of home road cars varied by year.  The data in this document show how that percentage varied through the Great Depression into the peak traffic years of WWII.  Due to the vastly different economic conditions, straight percentages won’t be accurate for what you would see in typical freight trains.  During the Depression, many freight cars were stored, traffic was way down, and lots of older cars were eventually scrapped or rebuilt and not available for use, but were in the home road totals until they were disposed of.  That said, there was an absolute higher percentage of home road cars in use on line during the Depression than during the traffic crunch of WWII.

Santa Fe retired many of its truss rod reefers in the mid 30’s resulting in a decline in numbers to around 14,000.

The percentage of foreign reefers remained fairly consistent through 1936 , then began increasing as the economy recovered and wartime demand called for utilization of every available rail car.  These numbers comport with the long held image of nearly pure SFRD reefer blocks on the Santa Fe, at least in the Depression era.  SFRD business practice of providing its own reefers for loading whenever available contributed to the low percentage of foreign cars.  ICC car service orders changed the distribution during the war years.

The traffic increased with more foreign cars providing a greater share of the on-line cars.

The foreign portion seen on the Santa Fe during the depression averaged less than 10% of reefers on-line with slight seasonal bumps.  Starting in 1937, the percentages steadily increased with larger seasonal peaks.

If you are a Depression Era Santa Fe modeler, you don’t need many foreign reefers.  And many of those should be meat reefers, of which the Santa Fe/SFRD had very few.  Not so if you model the WWII era.  In addition to the commercial meat reefer fleet, you will need a fair number of competitor’s reefers such as PFE, FGEX, ART and others.

I’ll address the box and auto cars in future posts.

Posted by North Bay Lines at 9:24 PM No comments:

US Refineries in the 40’s

Back in June, Dave Parker posted a document to the Steam Era Freight Car list that listed the petroleum refineries as of 1948.  As Dave stated in his post, he thought it might be helpful to fellow steam era modellers.  I found it helpful, but thought there could be a better reference for my 1944 modelling era.  The title of Dave’s Report was Information Circular 7483, Petroleum Refineries, including Cracking Plants in the United States, January 1, 1948.  The US government publishes all sorts of helpful information on the industries it regulates or have impacts on our economy and national security.  You just need to know what to look for, and Dave’s post put me on track to solve what to me had been a mystery of the origins of the loads arriving at Port Chicago in November 1944.  http://northbaylines.blogspot.com/2012/09/interchanges-2-port-chicago.html

An internet search led me to locate several versions of the circular from the ‘20s and later.  Information restrictions during WWII apparently restricted or halted publication during the war years, but I did find the 1941 and 1947 versions that bracket my time of interest.  Thanks to my Library of Congress reader card, I was able to download each report in its entirety at one shot, rather than the page by page method I had to employ before I got the card.  Once I had the reports, I transcribed the refinery information into an Excel spreadsheet.  I simplified my data into single columns for crude and cracking capacity for each year yielding 4 data columns rather than 12.  If an operating plant had capacity shut down or under construction, only the operating capacity is shown.  Similarly only shut down capacity is shown if there was construction at a shut down plant.  The capacities are shown as follows: operating in black, shutdown in red, and under construction in grey.  In another project, I’ve been transcribing the April 1944 Official List of Open and Prepaid Stations.  I’ve added which railroads served the cities where the refineries are located.  I omitted steamship and barge carriers, as the coastwise shipping was shutdown during the war and I didn’t have an interchange with a water carrier.  The list of railroads and the abbreviations used is included as a spreadsheet in the Excel file.  That sheet also has the 1944 Railway Accounting Codes that were required as header information on each company’s waybills.  As a Coast Lines Santa Fe modeler, I am sensitive to the fact the Santa Fe had four distinct operating companies with different Code Numbers in my operating era: Atchison Topeka & Santa Fe, AT&SF, 22; Atchison Topeka & Santa Fe Coast Lines, ATCL, 30; Gulf Colorado & Santa Fe, GC&SF, 315; and Panhandle & Santa Fe, P&SF, 617.

The four refineries supported by my layout are listed below:

That is a small example of the data contained in the 656 entries in the spreadsheet.  You can also filter by railroad.  For instance the Atlantic Coast Line served three cities with refineries:

That doesn’t necessarily mean that ACL served the refinery, though, as C&O, N&W, NS, PRR, SAL, Sou, and VgnRy also served Norfolk and only one or two of those roads would have directly served the plant.

I’ve placed a copy of the Excel file my 1940s US refineries folder on Google Drive at https://drive.google.com/drive/folders/1gG7PrXx2Zr8kjw-HWmYeLieVgY0pxdGX?usp=sharing

along with a PDF listing of the refineries sorted by City and State.  The files are ©2022 John C Barry.  You may download for your personal use, but for commercial use, contact me at NorthBayLines@att.net.

Posted by North Bay Lines at 4:36 PM No comments:

Following up on their beautiful double sheathed, 40 ton USRA offering, Rapido has just announced their version of the single sheathed 50 ton USRA box car.  By my modelling era of 1944, nearly 2000 of the original 25000 cars had been rebuilt or wrecked, leaving 22201 cars in service in their original configuration.  Of these, the Pennsylvania RR rostered nearly half with 9765 of their X26 class, Milwaukee retained 3857 of their original 4000 cars, and New York Central had 1967.  A complete list of cars extracted from the October 1944 ORER follows.

Now to the applicability of the Rapido models to my era.

I can justify several of the Pennsy cars along with a couple from SP, MILW and NYC.  Singletons from the usable list can replace Accurail and Tichy cars currently in my fleet.  Time to call my dealer!

Update: Thanks to Jim Gates eagle eyes, I removed the PRR 83589 X25 series I misread as X26 and updated the totals in the text and table.

Posted by North Bay Lines at 10:57 AM No comments: