Richmond was a long way from the sand pit on the El Segundo Branch that served the LA division.  Photographic evidence shows sand shipped to the sand house in SP drop bottom gondolas as shown in my previous post http://northbaylines.blogspot.com/2014/04/locomotive-sand-at-richmond.html.  But where did this sand come from?  Could have been from the central valley or the Sacramento River, but there were a group of sand sources on the coast at Monterey served solely by the SP from their Monterey Branch.  My search for which companies could have provided the sand turned up a 60’s era geological report, Mines & Mineral Resources of Monterey County, CA, by the California Division of Mines and Geology.  The full report can be found at https://ia700805.us.archive.org/14/items/minesandmineral05hart/minesandmineral05hart.pdf

This report has a 23 page section on sand and gravel operations in Monterey County.  Most of them are too recent or produced larger aggregate for cement and road purposes, but I did find documentation of sand operations going back to the 19th century.  One of them that fit into the era was Granite Construction, but their description stated they mined sand and aggregates solely for use in their own adjacent asphalt and concrete plants.  Scratch that source.  Owens Illinois operated a plant at Moss Beach and shipped a lot of sand by rail.  But they shipped most, if not all of that sand to their glass plants in Oakland, Portland and Tracy.  This would be a great industry for an SP modeler shipping on line.  SP would have provided home road cars for this service according to the car service rules.  Del Monte Properties had an adjacent plant in Moss Beach that also produced a variety of specialty sands and remains a candidate.  But engine or locomotive sand is not specifically mentioned in the report, so this one has to be a maybe.  A strong maybe, but not a confirmed source.  Both of these plants are at the far end of the Monterey Branch west of Pacific Grove as indicated on the map. 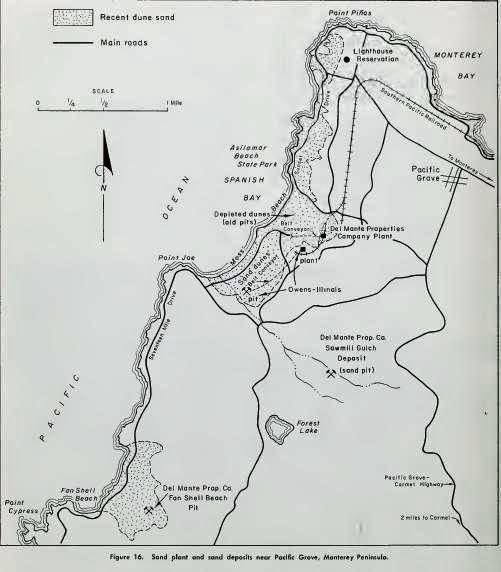 Moving up the coast back towards Castroville, the older Monterey Sand Company plant at Marina has been operating since 1944 and the Sand City location formerly run by Sydney Ruthven in the 30s has been run by them since 1946.  Both locations are directly rail served by SP and Monterey Sand Company is listed as producing engine sand.  Bingo a confirmed source that operated at the time of the photos.  3459 did not arrive on the Valley Division until 1946, so the sand in the SP gon behind it could have come from here.

But wait, there’s more!  A bit further to the north on the Lapis Spur off the Monterey Branch is the Pacific Cement and Aggregates (formerly Pacific Coast Aggregates) plant in Lapis.  This location has been in production since 1906 and owned by Pacific Coast/Cement since 1929.  They are listed as having produced Locomotive sand for track sanding.  How cool is that?  It’s not every day that you find a reference to a specific (very specific) commodity produced 70 years ago in what many consider to by a dry bureaucratic trieste on esoteric ephemera.  Thank You California Division of Mines!  And for those of you interested in modeling a beach side sand operation, that report contains a number of photos of drag lines, dredges and processing facilities that  can add interest to your layout.  And sand was processed a lot more than simply scooping it off a dune and dumping it into an open top rail car.

An excerpt from the Monterey Mineral Map covering the coast and sand production sites follows, the full map and key are the last several pages in the PDF linked above.  Many other opportunities for SP modelers to be found there. 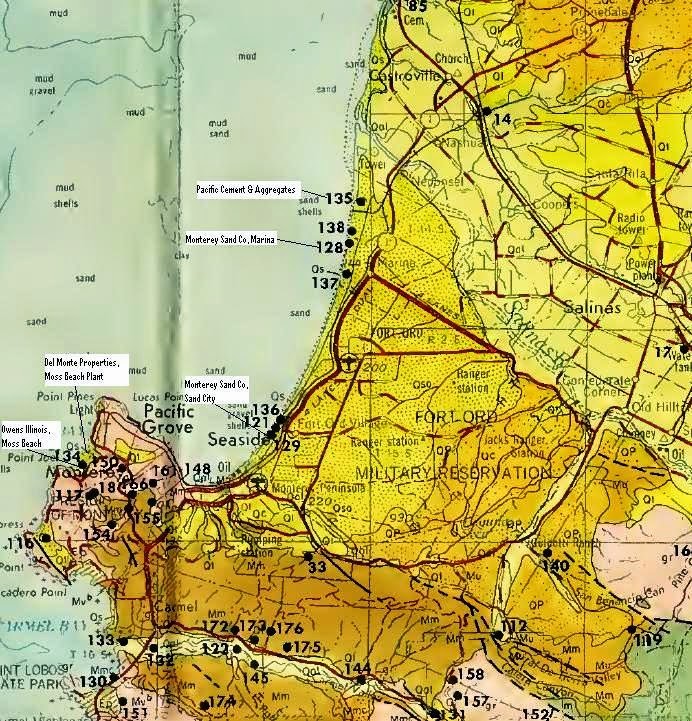