I’ve had this map in my collection for several years, long enough that I’ve forgotten exactly where I found it.  For the longest time, I wasn’t sure when it was published, until I discovered a small notation, “6-44,”in the lower right corner, separated from the legend where you normally find the date.  Well, that made my day, but at 24”x36” with lots of fine print, not terribly useful to these aging eyes.  So back into the stash it went.  I came across it again while I was scanning some newly acquired photographs using my new Epson flatbed scanner.  Hmm, I wondered if I could use a digital magnifying glass?  After all, I do have a pair of pretty large flat screen monitors for my desktop.  My first thought was to find a large format scanner, as this had worked well in California with several maps and blueprints that I had borrowed.  A discussion with one of the local print shops that USED to have such a scanner led to the suggestion that I scan and stitch together in Photoshop as that I was what he would have to do.

I had a direction.  I scanned overlapping sections of the map at 1200 DPI and ended up with seven 3-400 MB files.  There things sat for several weeks as my copy of Photoshop was on a broken 13 year old laptop and I couldn’t find the original CD.  I do have PS Elements 15 on my current machine, but I hadn’t found a way to use Elements to stitch photos together.  Then on Wednesday, I viewed Ted Culotta’s Lightroom clinic.  I was impressed with the ease of reassembling the multiple screen shots that he demonstrated.  I resolved to resurrect my copy of PS CS2.  Before that happened though, Michael Gross posted that he had found the perspective crop hidden away in a dialog box on his copy of PSE15, the same version that I have installed.  That inspired me to see if I could find and use it as I had before my 2007 laptop was damaged.  A quick experiment with a photo I have of an Fe-U yielded these results:

The Bx-35 was converted from the Fe-U by sealing the aux door and extending the car lining inside it.  I’m in need of a pair of these for my 1944 layout and this was a natural to try the technique on as it could help with a future scratch building project.

Then I thought, if that’s there, what about the stitching tool?  Well, it sorta is.  I discovered the “panorama” tool in the Guided mode.  It can and does (sometimes) combine images that have overlap.  My first attempt using all seven of my large files flopped.  Hmm, lets start smaller and combine only two.  That did work, and so did two of the combinations of three but not two of the combined files with each other.  That’s when I discovered the file size limit in PS Elements, 30,000x30,000 pixels and I needed something like 55x25 thousand to assemble my files as is.  Sometimes you can have too much of a good thing, and I’d scanned at too high a resolution to successfully reintegrate the separate images with the software I had.  But, I was able to downsize the files to 900 DPI resolution and combine the four files of the northern portion as well as the three of the southern into two transcontinental maps.  Better than seven, but still not what I was hoping for.  Starting with the northern map, I expanded the canvass and manually imported the three downsized files and manually aligned them.  I didn’t do a perfect job as I discovered that my scans each had some minor distortions.  But I managed to make it mostly work.  At some point, post covid, I will rescan the entire map on a large format scanner and eliminate the minor discontinuities.  But until then, this version will allow me to zoom in and out while tracing routings across the US and Canada. 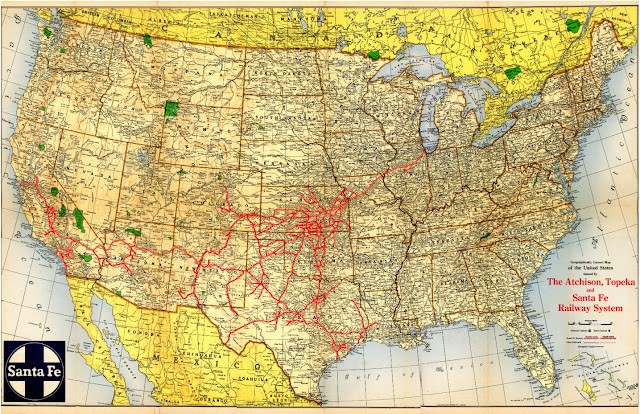 I hope you find this useful as well.  You can download a higher resolution copy at Google Docs 44 Rail Map.  Even reduced and saved as a JPG, its still a very large file at 87MB.  Enjoy and stay safe!